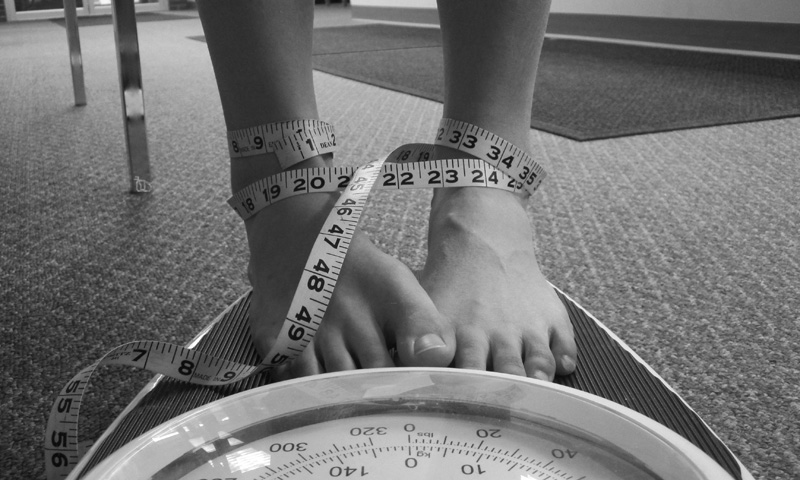 Climbing With An Eating Disorder

By climbhealthyFebruary 24, 2015Featured, Nutrition
No Comments

In addition to the sudden snowpocalypse sweeping the nation, this week also happens to be National Eating Disorders Awareness Week. Eating disorders affect over 30 million people in the US in various walks of life, but they are especially common in sports that are dependent on weight, such as rock climbing, wrestling, body building, and running.

According to the National Eating Disorders Association (NEDA), a disorder can be defined as “extreme emotions, attitudes, and behaviors surrounding weight and food issues.” NEDA reported that:

Fifty-seven percent of girls, between the ages of 9 and 11, experiment with crash dieting, fasting, self-induced vomiting, diet pills, or laxatives (1).

One in five boys is obsessive about their weight, suffering mainly in silence (2).

Sometimes it can be difficult to recognize the signs of an eating disorder in yourself or those around you, so if you’re not sure, then you can take a free, anonymous online assessment here.

If you suspect that someone you love is suffering from an eating disorder, the best thing you can do is approach them privately with kindness and respect. Understand that you may not have all the facts, and remember that some people are naturally thin.

If you are struggling with a negative body image or an unhealthy relationship with food, please know that you are NOT alone. There are over 30 million other human beings who understand exactly what you’re going through. 30 million.

Talk to someone. Confide in a supportive community. Share your secret… because one of the deadliest symptoms of an eating disorder is silence.

Breaking that silence, we have a guest post this week from Celine Boulenger, a climber who’s injury finally saved her from her battle with Anorexia Nervosa.

Climbing With An Eating Disorder

Being a woman is not easy; we have societal pressures to look a certain way, and we tend to be overly critical of ourselves. I am from Belgium, where there is a serious pressure to be thin. I remember in high school, there was one girl in my class who was overweight (but not obese), and she was not treated very kindly. Even worse, I myself was not very nice to her.

Strangely enough, my body image issues actually started when I came to the United States. I was in a verbally abusive relationship for many years, and it slowly created these distortions in my head. Mean words about how I looked from my partner made me think of myself as worthless and fat, even though I was 120 pounds and only 5’6’’.

At first, my solution was to exercise as much as possible to lose weight. I started running and taking fitness classes, thinking it would help me reach my goal of becoming really thin. I was always exhausted, and I did lose some weight, but not as much as I would have liked.

Along with the running and gym workouts came weight gain in the form of muscle mass. At the time, I was completely obsessed with the scale. I weighed myself at least 5 times a day. I later realized that when you have issues with body image, the ideal weight you want to reach doesn’t exist at a fixed number. It goes down every time you have lost more weight, creating an endless cycle.

Since I still did not look like my ideal, I decided I would try different diets.

First, I tried a very low carb diet, where I only ate carbohydrates for breakfast, and then starved myself all day until my meager dinner. I would wake up at 4am starving to death and would binge on breakfast cereal all alone in the dark. Needless to say, these were really sad times in my life.

I once did not eat for 13 hours, and I remember telling all of my friends that I had “beat my record” even though deep inside I was starving and wanted someone to rescue me from this hell. For a couple of years, I would go through phases of starving myself and then eating more again.

My weight would fluctuate between 110 to 125 pounds. I felt like I didn’t have a whole lot of energy when I was climbing, and I also got sick easily. My partner at the time did not seem worried that I was starving myself or that I had such negative thoughts about the way I looked. To the contrary, he kept saying things that would feed the disorder.

Three years ago, I finally decided to try a new diet: a whole plant-based vegan diet. This turned out to be one of the best things that happened to me, but only after it made my disorder worse.

The thing is, I quickly realized that with a vegan diet, I could drop my weight even more. I did not need to starve myself, just eat less than normal, and I lost weight extremely fast. Within a month, I had lost 15 pounds and found myself at 104 pounds, my lowest weight.

The worst part about eating disorders is that it feels like a game you want to win. So each time you reach a new “record weight,” you feel proud of yourself, as though being able to starve yourself and be rail thin is any kind of accomplishment; as though it means you are stronger or better than everyone else.

However, I’ve realized now that part of being strong is being able to take care of yourself in a healthy way. I thought I was doing well by eating healthier foods, but I was hurting myself by eating too little. I was eating around 1200 calories a day, while climbing 4 to 5 times a week.

Of course being light helped with climbing. I definitely went up a few letter grades at first, but after a while, my eating habits started to hurt my climbing: I felt tired and weak, and I had such a hard time putting on any kind of muscle mass.

This was extremely frustrating, as I knew this disorder was hurting my performance and hurting my body, but I couldn’t shake the little voice in my head saying, “You’ll get fat if you start eating normally again.”

And then one day, I tore my labrum on my left shoulder. The labrum is this little piece of cartilage that holds the shoulder together. It was the most painful injury I had ever had.

I was unable to climb for many months and had to do a lot of physical therapy for it. It is probably one of the worst things that ever happened to me, but it’s also the reason I was able to recover from my eating disorder.

By then, I had already realized that under-eating was not good for my climbing, but once I found out that it was also contributing to my frequent injuries, I was forced to face the truth and turn my life around.

I knew that for my body to heal itself, I needed to give it enough calories to do so. I also knew that if I kept eating so little, I would do damage to my body that might never be reversible. My body breaks so easily now. I get injured a lot, and I am just fragile.

Luckily, my eating patterns are much healthier now. I am still vegan, but I don’t ration my portions anymore. I am also finally at a healthy weight.

I don’t know how much I weigh because I haven’t owned a scale in a while, but I know that I don’t look unhealthy anymore. Luckily, I have had enormous support from my amazing (current) boyfriend and from my best friend, and I wouldn’t have gotten out of this nightmare without them.

I now eat breakfast at a normal time and no longer feel hungry all day. I also do not obsess about food like I used to. Food is just food. It is fuel to climb hard and to feel good. As long as I am eating the right things in normal quantities, that is all that matters to me.

Unfortunately, I think eating disorders are a real issue in the climbing world. It is a fact that most strong climbers have extremely low BMI’s, and I have met many climbers who looked borderline-anorexic. And once you have been there yourself, you know the signs to look out for.

People with eating disorders talk about food in a certain way and often dislike their appearance. It makes me upset to think that such an amazing sport could be the motivation behind these unhealthy eating behaviors. I have mainly seen this in female climbers, but it is a growing issue for men as well.

I am glad that I am now on the other side, the brighter side, of this and I can share my story with fellow athletes. I hope that my story will prevent others from going down that road because that road only brings misery, pain, and a potential end to your climbing. 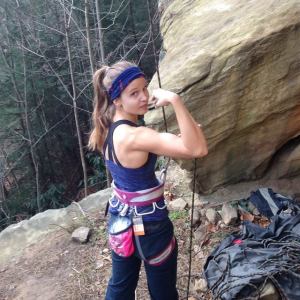 Sometimes it can be difficult to recognize the signs of an eating disorder in yourself or those around you, so if you’re not sure, then you can take a free, anonymous online assessment here.

If you are struggling with a negative body image or an unhealthy relationship with food, please know that you aren’t alone. There are over 30 million other human beings who understand exactly what you’re going through.

Say something about it. Share your secret. Get it off your chest, and get back on the road to recovery.