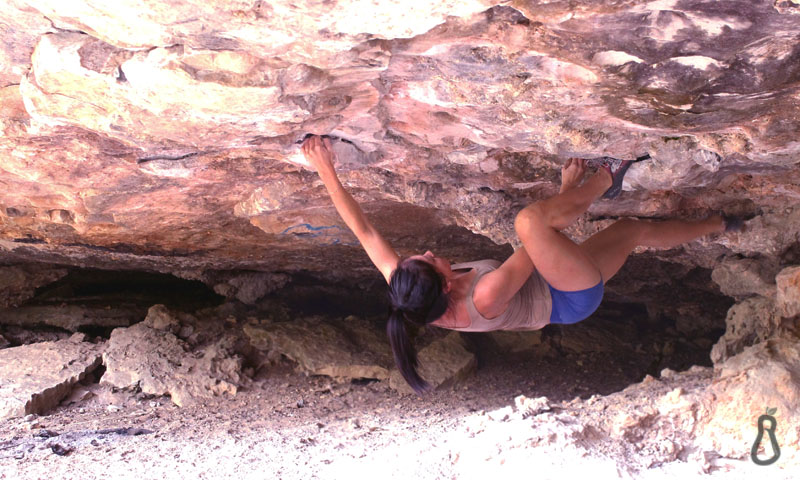 How To Overcome Disappointment

Climbing has become one of my strongest passions for so many reasons. Outside of the physical benefits of the sport, I feel that climbing has greatly improved my mental and emotional health. After some mild disappointment last weekend, I decided to explore the reasoning behind my disappointment, and my discovery was a bit deeper than I had originally anticipated.

This weekend, I got on a route for the first time with high hopes of red pointing it. All the advice and encouraging words from fellow climbers had me convinced that it was within my reach. I was able to cruise the route up to the crux, which, for me, was a full-on, slightly overhung dead point pulling over a lip to a very slopey pinch (literally my two biggest weaknesses in terms of grip strength) just an inch out of my reach. After that was a dyno to the ledge and a jug haul to the chains.

I tried the crux numerous times, sussing out the best beta, but the move continuously seemed just out of reach. Naturally I was pissed, and after a couple more tries, lowered off feeling somewhat defeated. Friends congratulated me on my flash attempt, but I couldn’t help but feel bummed about my performance. After throwing myself a mini pity party, it occurred to me that my feelings of disappointment were almost a knee-jerk reaction, like a conditioned response to falling short of my goals.

I think it’s important to always ask yourself why you feel the way you do. When exploring the cause of your disappointment, ask yourself: Were you capable of making that move? Have you made that type of move before? Has it become one of your strengths? Have you been diligently training your weaknesses? Have you given it multiple attempts? If you answered no, then there’s really no logical reason to be disappointed. Sadly, we often toss logic out the window and let our emotions get the best of us.

I definitely had no legitimate reason to be upset. I was unable to flash a route (which isn’t my strength), and I was unable to redpoint on my second try due to a very beta-intensive move. Big deal. If anything, I realized I should be psyched that the route only had one hard move for me, instead of 15 in a row.

Now, I thought this was the end of the self-reflection, but as it turns out, I was wrong. Later in the week, I read an article in the Huffington Post about perfectionism and how it can ruin your life. As a textbook perfectionist, I decided to read the article. Never in my life have I felt so vulnerable and transparent as I did when I finished reading that article. With the exception of a few examples, that article nailed all of my fears, vices, and tendencies with terrifying accuracy. It was humbling, fascinating and inspirational, demonstrating how childhood experiences could have such lasting effects on the human psyche.

Perfectionism is an attribute that begins developing very early in life. It can have positive effects on life, such as attention to detail, organization, and clear communication, but it often stems from negativity – a feeling that you’re not quite good enough for something.

There’s a fine line between making excuses for your failures and cutting yourself some slack. When we excuse away our failures, we do our best to maintain the perfect façade that we spend so many years constructing. We hide our failures from others and only share our accomplishments, which only encourages us to continue questioning our self-worth. However, when we accept our shortcomings, allow them to be public, and understand that they are not truly failures, then we begin to instill a greater sense of self-worth and self-esteem.

The bane of perfectionism is placing all of your self-worth in your achievements. Whether it be grades, sports, music, or relationships, we are completely conditioned to believe that we are defined by our achievements, but that is a complete lie. Our achievements can certainly shape who we are and who we want to be, but you are so much more than what you have achieved. I find this perfectionist tendency to be particularly common in professional climbers, whose performance determines their livelihood.

It’s easy for us to look at some of the climbing legends and put them in a box, labeled, “Best Climber Ever,” but they are so much more than that. The professional climbers that we place on these high pedestals are also husbands, wives, girlfriends, boyfriends, sons, daughters, brothers, sisters, aunts, uncles, spouses, and friends. To define them solely by their achievements would be ridiculous, so why do we do the same to ourselves? Even Jonathan Siegrist admits, “Climbing is a huge part of my world, but it’s not everything.”

I think the sooner we give ourselves the permission to be imperfect, the happier we will be. When we stop relying on our achievements for happiness and realize that happiness is a choice we make every day, I believe that it will only get easier to get back up when we fall (especially if it’s on a rope because bouldering freaks me out). Even if you’re super successful in climbing and getting stronger by the day, I think it’s relieving to know that you are so much more than what you accomplish.

Sarah Fullerton put it best when she said, “Climbing is my hobby; it is not who I am,” and that is exactly what I intend to remind myself as I continue on in my climbing adventures.

What Every Vegetarian (And Vegan) Should Know

What Every Vegetarian (And Vegan) Should Know