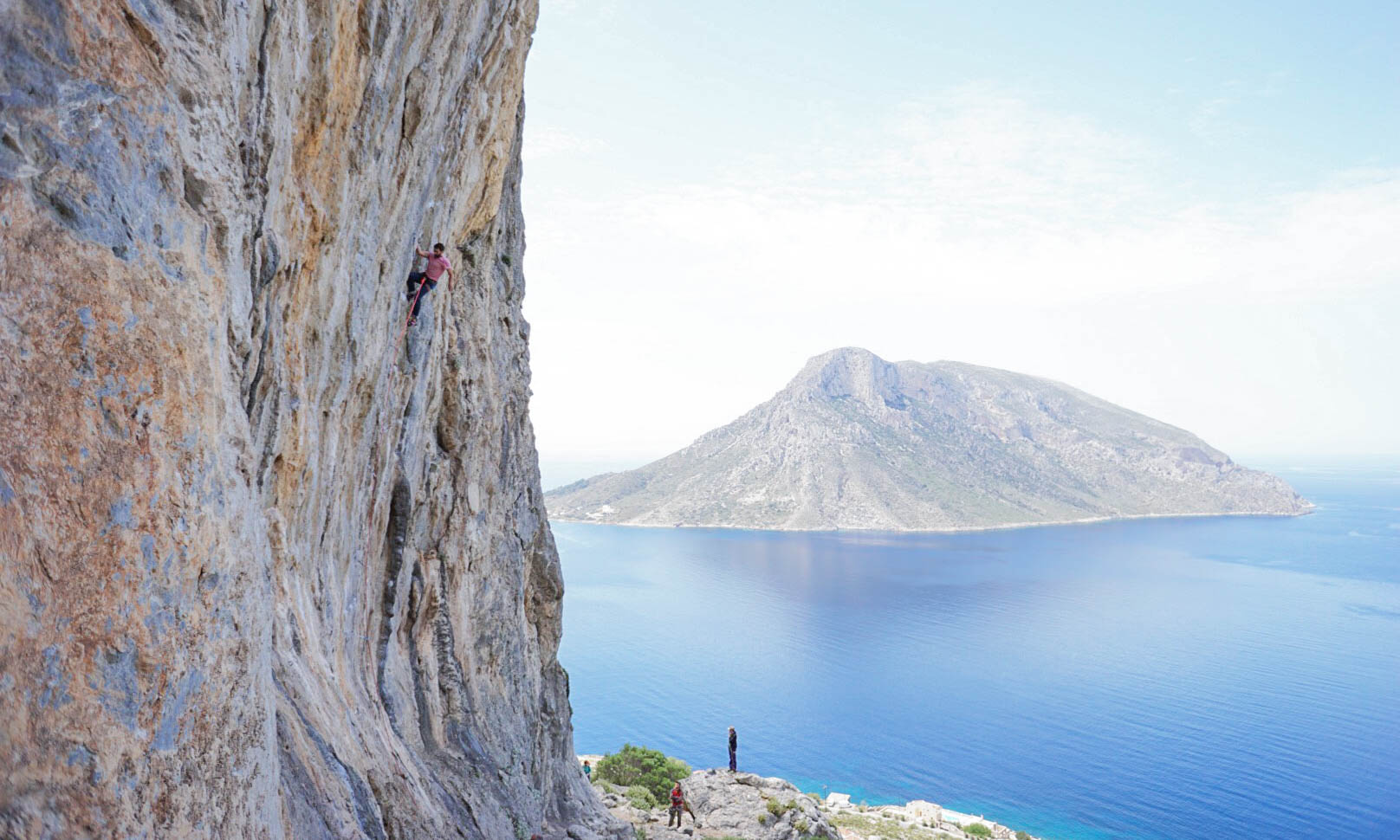 By now you’ve likely heard or read all about the world-class climbing that Kalymnos has to offer. Greece has been on my climbing bucket list for the past 6 years, but I really never thought that I would be able to cross it off so soon. If you’re even toying with the idea of making the trip to Kalymnos, I would highly recommend it – you won’t regret it!

If you want to visit Kalymnos when all the other climbers will be there, then look at going between May and October. The locals say that it starts to get hot in June, but you can easily chase shade all throughout the summer and avoid direct sunlight. The temps will start to cool off again in October, as tourist season comes to a close.

If you prefer colder temps and solitude, then you might want to consider visiting between November and April. Many of the shops and restaurants close down during the winter, so it’s definitely a different experience, but prime conditions for all you introverts.

Depending on where you live, you might be able to fly round trip to Greece for under $1000. I found a ticket to Athens for 2 weeks for only $741 round trip out of the Houston international airport – about $500 cheaper than flying out of Austin.

To cover your bases, I would recommend using the Google Flights tool to check flights to Athens and Istanbul.

Once you’ve made it to Athens or Istanbul, you’ll need to book a domestic flight. You can either fly directly to Kalymnos, which may be more expensive, or you can fly into Kos and take the ferry to Kalymnos.

For more Kalymnos travel beta, check out the travel recommendations at Climb Greece.

If you’re traveling in April/May or September/October, you should probably book your accommodations in advance; however, it is not absolutely crucial, as many places do not have an online presence.

If you want to be close to all the excitement (i.e. coffee shops, restaurants, adventure center), then you’ll want to stay in Masouri, Mirties, or Kamari. We stayed at the John Galouzis Studios with an incredible view, full kitchen, and two bedrooms for €50 or $57/night.

If you’d prefer a more romantic, remote atmosphere, then you might want to stay a little further north in Skalia or Emporios.

How to Get Around

You can rent a car while you’re in Kalymnos, but you definitely don’t need to. The island is so small and condensed that you can easily get to the crag by scooter and walk to nearby restaurants and shops.

We went to Kalymnos Scooter Rental and got our scooters for €6 or $7/day (during low season).

Oh my goodness. The food in Kalymnos is delicious. They have plenty of seafood, traditional Greek food, Italian food, and even some really tasty, authentic Chinese food.

Most of the dishes contained some form of wheat and/or animal products, so it would be a difficult place to travel if you adhere to a gluten-free or vegan diet, but not impossible. For the vegetarians, there were plenty of meatless options at every restaurant, and plenty more options for pescetarians.

Here are some of my favorite food finds from the trip:

If you climb 5.12, Kalymnos is just a climber’s paradise. To me, it’s like a limestone Red River Gorge with better views and a beach. And while it’s known for its steep overhung climbing, there’s actually plenty of technical, vertical routes as well.

Odyssey is a super popular crag because it’s close to town, has a short approach, and hosts some pretty awesome lines. I only had the pleasure of climbing there for 2 half days, so I didn’t get to try too many of the routes, but my favorite was probably Dafni 7b (12b) that I sent on our last day in Kalymnos.

The route is pretty chill up until the last bolt, but it’s definitely a pump-a-thon, so I had to take full advantage of the low rest and race to the finish.

Grande Grotta is probably the most famous and impressive crag in Kalymnos. If you like overhung climbing like I do, this will be your paradise. It does take time to get used to the style in the Grotta though, so don’t let any failed attempts get you down.

Sadly, I didn’t get to spend much time here, but if you’re down for an adventure, then bring an 80M rope and go for the onsight of Priapos 7c (12d). It’s a mega classic!

Sikati Cave was probably my favorite crag on the island. It’s a full-day commitment due to the approach, but it’s absolutely worth it if you have time. You’ll have to either rap down into the cave or scramble down, making use of a makeshift via ferrata. The classics in this cave include: Lolita 7a (11d), Armata Sikati 7b (12b), Morgan 7b+ (12c), and Las Dents de la Mer 7c (12d).

For only €10/person, you can take a boat over to the island of Telendos and check out the sharper limestone at Eros. If steep, overhung caves aren’t your cup of tea, then you might prefer the more vertical routes at this crag. My favorite routes at this crag were 3 Ilots 6c (11b) and Tremendos en Telendos 7b (12b). If you’re looking for something a little harder, check out Adonis 7a+ (12a), Eros 7b (12b), and Mira que Tinc 7b+ (12c).

If you enjoy sport climbing on limestone with breath-taking views, then it’s time to add Kalymnos to your climbing bucket list.