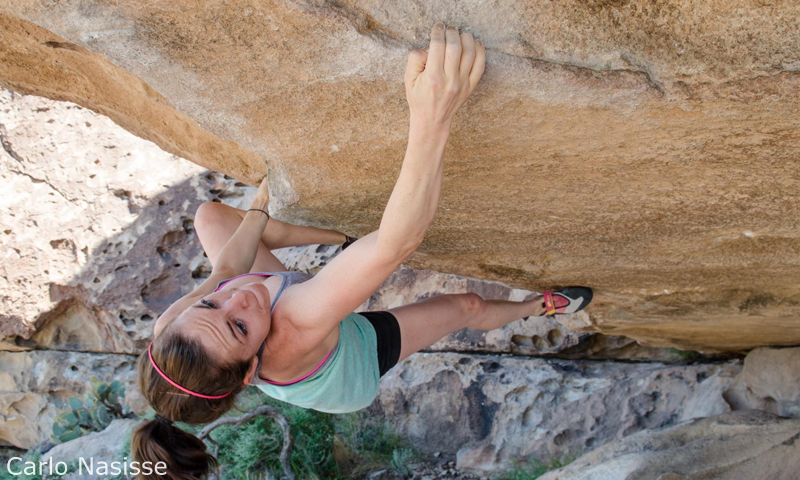 5 Things I Wish I Knew About Climbing 5 Years Ago

Whether you’re new to climbing, or seasoned masochist, chances are you can still learn something new about the beautiful sport of climbing. This week, I wanted to share a great blog post from Sarah Williams about lessons she’s learned over the years.

Sarah is a competition and outdoor climber, who recently celebrated her 5-year climbing anniversary. She has climbed V8 and 5.12b, and currently attends medical school at Baylor… like a boss. Sarah placed 2nd in CCS Nationals in sport climbing in 2013 and 3rd in CCS Nationals in bouldering last year, and she just plain loves climbing.

So for those of you who are new to climbing, hopping back on the wagon, and all aboard the send train, check out Sarah’s 5 solid tips 🙂

This post was recently published on Crux Crush, a great climbing blog made just for women, so (ladies) make sure you check that out as well if you like girl power and ladies night! I know I do.

5 Things I Wish I Knew About Climbing 5 Years Ago

September marks my 5 year anniversary of learning to climb. Reflecting on my weaknesses when I first started climbing I came up with 5 pieces of advice that I wish I had known 5 years ago. Hopefully it helps any of you out there who are getting into the sport!

Any gym rat can tell you that grades are very subjective. You may be cruising V5’s but just can’t seem to pull the move on one funky V3, or you might put 15 attempts into a V6 and flash the V7 next to it. Just because you’re climbing V3 and projecting V4 doesn’t mean you can’t jump on a V5 or even harder.

To some people this is naturally obvious, as evidenced by that guy whose struggling on V2 but sees a girl climb a V7, so he sits there falling on the first move for a good 15 minutes. But others, like my younger self, are quite a bit more timid.

I know that I rarely tried grades above my limit for fear of being that guy who repeatedly falls on the first move of a climb.

But, if we never try hard, we’ll never improve. Sasha Diguilian wrote a really great article on this awhile ago. Getting on hard climbs helps us to learn the movements that we need to master in order to climb harder.

I used to rarely climb roofs because I knew that I was horrible at them. But as I got better at vertical climbing and timidly, occasionally attempted a roof climb even 2 grades below my max, I often fell.

By not practicing the movement needed to send roof climbs I was limiting my own ability. Which brings me to another point…

As I started to realize how much my fear of failing was impacting my climbing I came up with the 7 try rule. It’s pretty simple: if you fall on a climb, you have to try that move 7 times before you can walk away from the problem.

So, you walk up to a boulder problem around your level. The first move is a throw to a sloper. You get on the holds, set up, go…..and splat, you’re back on the ground.

You think to yourself: “Well, that’s a weird move, and it’s a really bad sloper, and I’m too short to make that long of a move, and I don’t like dynamic climbs–I’m a static climber so I’m just going to try something else.”

Don’t make this mistake! Try it six more times. More often than not you will surprise yourself with how much progress you can make if you just commit to working out the move 7 times.

Cruxy moves often involve a learned body movement, and trying it just once won’t suffice. By walking away from climbs that don’t seem to be your style on first glance you’ll severely limit yourself, and the skill gap between your strengths and weaknesses will grow even wider. 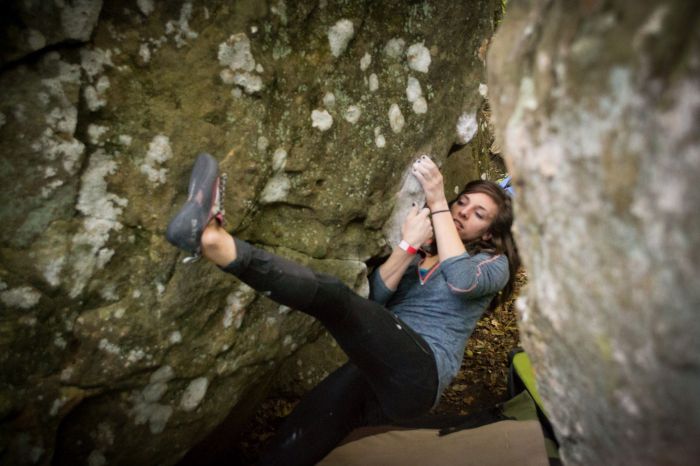 No one is naturally great at every style of climbing; whatever your weakness is–pinches, dynos, slopers–you have to continually practice those movements to get better.

So what are you thinking about or working on during those 7 tries?

3. Focus on the Movement

About 2 years ago I was trying to stick an aaallllmost deadpoint, where my foot kept popping. My boyfriend (who was also a climbing coach at the time) told me to try the move while thinking about my left foot.

My first instinct: “What does that mean?  What am I supposed to think about my foot? It’s location? The styling climbing shoes I’m wearing?” But nonetheless I tried the move while realllllly focusing on pushing with my foot, and I stuck it for the first time after countless attempts.

This was seriously a turning point in climbing. The notion that you could use mental effort to focus on all the little motions that your body goes through while doing a difficult move was revolutionary. 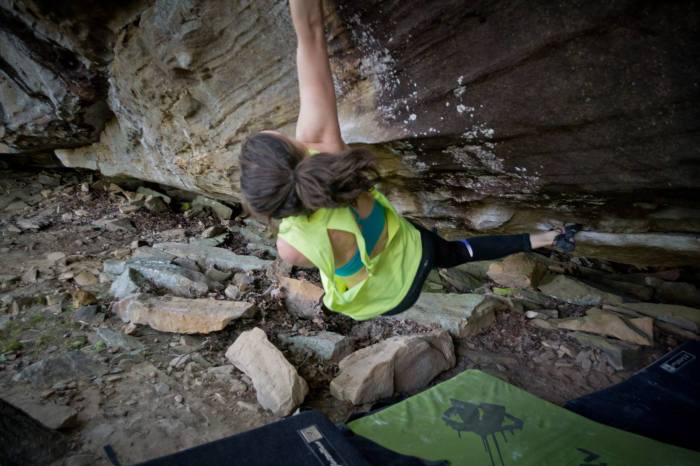 Nowadays I am constantly thinking about these little movements while climbing, and when I implement the 7 try rule I am putting out at least as much mental effort as physical effort.

Do I need to focus more on engaging my core? Is my body too far away from the wall? Do I need to put more power into my jump? Clearly there’s a lot of questions to address to answer the simple question: why did I fall? That’s why you need 7 tries (at least) to fine tune the movement.

What if I still can’t figure out this move?

As a beginner climber 5 years ago, I knew a couple other beginner climbers, and we would all try to help each other out with tricky problems. Working out a climb with other people at your level can be one of the most fun parts of climbing.

But, occasionally asking a more experienced climber for help on something that you just can’t figure out is a great resource for improvement. I feel really lucky to have learned to climb on a team where there was a coach and plenty of people stronger than me to help me work through tough moves and tell me what I needed to do to improve.

Even now, when I see someone cruising a move that I fell on I’ll ask them how they did it differently. And if I’m really struggling, I may ask someone to watch me and tell me what I’m doing wrong.

asking Jeline (from Climb On, Sister) for some beta

These days, I know many of the climbers at the gym, so I never feel embarrassed to ask for help. But when I was first getting started, I didn’t know that many people so I never felt comfortable asking one of the stronger climbers for advice.

But to my younger self I would encourage you to Just Ask!! If someone just cruised your project as their warm up it’s okay to ask for advice. Most climbers are willing to share their beta and help out a newbie.

I have never asked for beta from a stranger and had someone turn up their nose at me and walk away. And when I get asked for advice from a new climber I’m usually flattered that think I’m strong enough to seek out beta from and always happy to help.

The last thing that I really struggled with, basically up until a year or two ago, was fear that other (stronger) climbers were watching me. So the last thing I would say is:

5. NOBODY IS WATCHING YOU

Okay, that probably isn’t true. Often times people will watch you climb things at a gym. But if they’re really staring at you throughout your whole climb, it’s probably because they’re falling on that problem and want your beta.

Everyone at the gym or the crag is there to hang out with friends and climb, just like you–no one is there just to people watch. Maybe someone sees you falling on your climb, but I can guarantee that they’re not sitting there laughing at your fall.

Even if those unknown climbers were working on the hardest climb in the gym, that also happened to be on that wall, they were for sure not going laugh at or criticize me for falling on my V4 project right next to their V10 project.

Most likely they’re focused on figuring out their own problem and are only looking at me on my project to know when they can safely get on the wall.

And one last little tip: if you’re working a project next to people who may seem (but are probably not) intimidating, it can help to make small talk with them about something unrelated to climbing, just to break the tension. 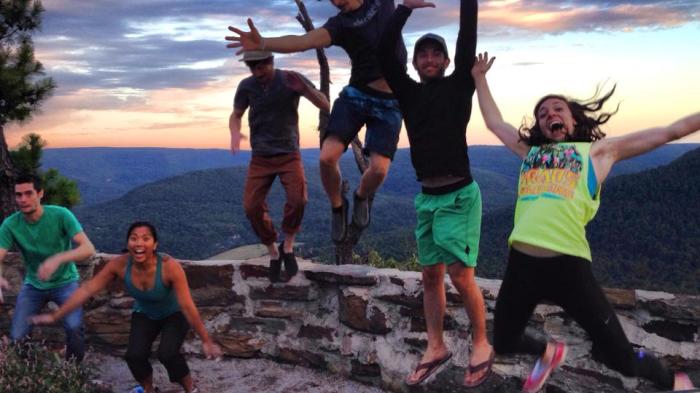 And don’t forget to have fun!

This post was originally published on Sarah’s blog: Climbing (Miss)Adventures.

To read more about Sarah’s adventures, climbing, and training at skladventures.wordpress.com.